In a previous post, I looked closely the way nvidia binary driver works. In fact, like a lot of users I run into issues with firefox and other software which use Xrender extension to display stuff. A couple of day ago, Nvidia released a new version of its driver. They claim the future version fix the Xrender lag, so I decided to run it toward my previous bench results to see if current version change anything.

So the configuration is the same:

First, I need to say that in the default setting the new driver doesn’t work really nicely. It’s look even slower than previous in the default configuration. So for the first time on this bench serie, I tweaked the InitialPixmapPlacement and set it to 2. In my previous bench batch, doing this tweak products bad result so I disabled this option, but this time the drivers is so slow that without this tweak the benchmark would be useless.

Ok, let’s go for the results: 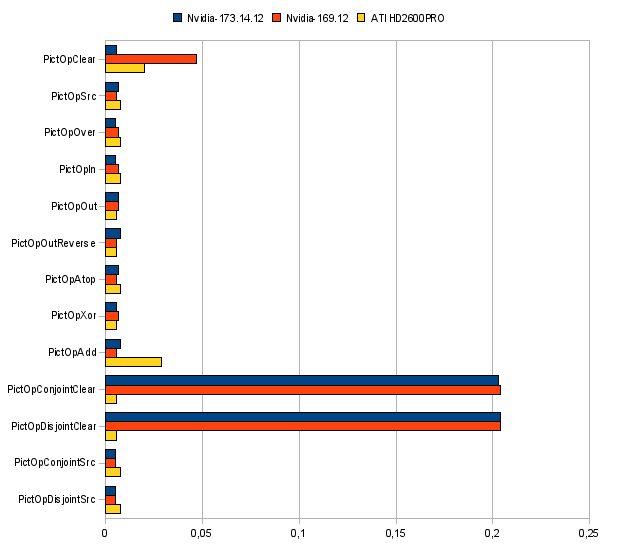 First, we can see clearly the new version is really better on some points : PictOpClear is the best result. We can see the nvidia team has really work on this, and the result even outperform the ATI driver. On the other side the PicOpt[Con|Dis]jointClear is still very hight.

For the rest of the test : 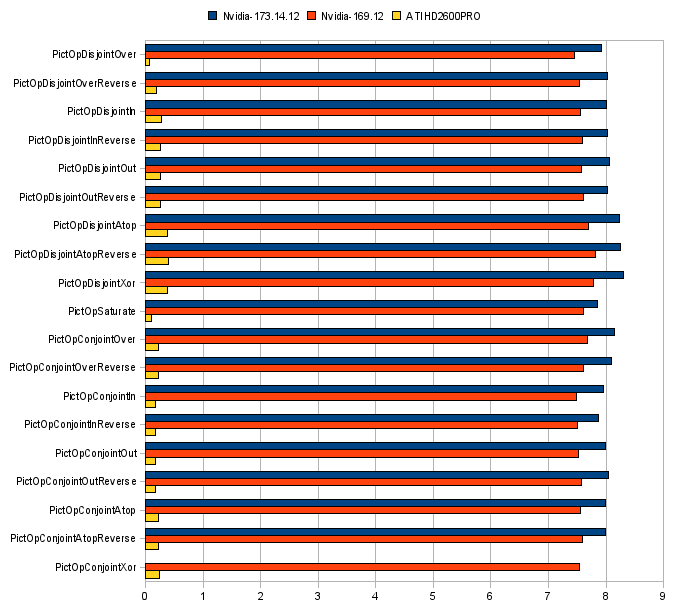 To things, on quite all the result the new driver is slower than the previous on (perhaps this is a InitialPixmap side effect), but the difference isn’t really big 0.5 sec on a test which is far from 0.5 at the end.. And the ATI still outperforms clearly the Nvidia here. In fact Nvidia driver’s team claim this primitives are never used (or should be). From what I know right now, some software use this primitive. It’s look like KDE (via QT) do. Apparently Nvidia team asked the KDE dev to change their code to achieve better result on Nvidia cards … Anyways this is perhaps not the best way, but we need to wait for KDE dev answer before going foward.

The second important thing is that PictOpConjointXor has now a 0 result.

As you can see on this benchmark, the new Nvidia driver seems to perform better than the previous one. On the user perspective, it’s look like the fixes applied for PictOpClear (and perhaps PictOpConjointXor) produce some great results. Right now Firefox perform nicely, and the whole desktop is fine. I’m quite sure their is still room for improvements (look at the open source Intel driver results for PictOpOver PictOpIn…, you will see binary drivers are far from the OSS results), but this release is the first for the 8xxxx serie which perform at a decent speed, and this is a good new.

Thanks again to my friends who send me their own results to compare, and to people on various forum that helped me on this stuff.

One thought on “Nvidia 173.14 xrender benchmark”